All our clinics remain open, read the latest update on COVID-19 safety procedures.

Hidden Hearing as a matter of stated policy and, more importantly, values, pays staff according to the role they fulfil and their productivity in it, without gender bias.

The largest single group of employees continues to be our Registered Hearing Aid Dispensers (129 employees) of whom 59% are male.  Dispensers are paid according to one of two standard packages, both of which have standard basic and standard productivity criteria, the second of which (less costly) replaced the first for all dispensers registering after April 2017.  The 2020 figures show that the % of female dispensers has increased from 39% - 41% compared to last year. However, female dispensers still have a lower average length of service (see fig.1) which are therefore disproportionately on the new package. 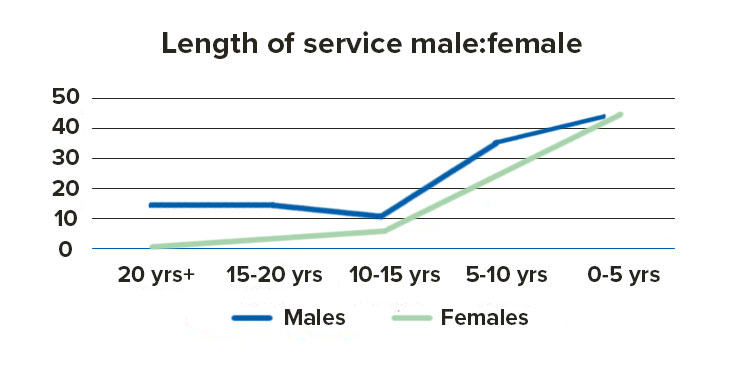 The Trainee Hearing Aid Dispenser programme continued to attract a good gender mix and in 2020 for the first time, the gender split was 60:40 female/male.

The Operating Manager Group (sales) is a little over 50% female.

The second largest group of staff, Branch Coordinators have variable basic pay, which is benchmarked against regional comparative roles.  There is a standard productivity scheme.  97% of Branch Coordinators are female.  There has been no change to this % despite a change in role title from Receptionist to Coordinators in an attempt to attract a more even gender mix.

The mathematical gap reported is driven by two further facts:

Looking at the Upper quartile pay range there is an increase in the % of females appearing in the top 25% of earners (from 34% - 36%).

We are pleased to see more balance in the upper quartile and are aware that the figures reflect a higher % of women in traditionally lower paid administrative roles.

We continue to work to close the Gender Pay Gap by:

The Company actively analyses staff recruitment, training and turnover looking for gender and other diversity issues.

Percentage of men and women in each hourly pay quarter

Percentage of men and women who received bonus pay